The Perfect Screen for Your Short-Throw Projector 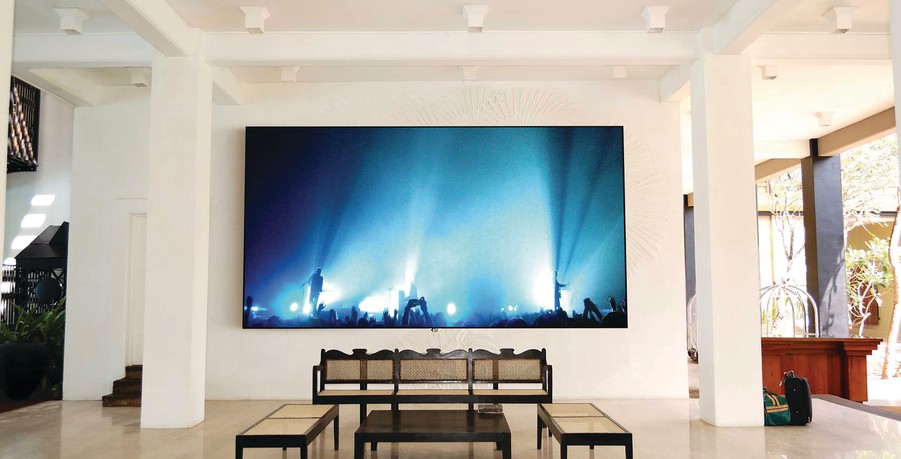 Are you building or updating your home’s media room? If so, you may be weighing your options between a TV or projector. We understand—it can be a tricky decision. TV screens generally have a brighter picture than projectors, and projectors are more suited to large, dark rooms like home theaters. On the other hand, projectors can create an immense image size that TV dimensions can’t compare to. But have you considered short-throw projectors? You may discover the best of both worlds.

With a short throw projector and an ALR screen by Screen Innovations, you can enjoy the benefits of a projector screen in your living room without compromising video quality or sacrificing space. The projector is placed right in front of a screen like a DVD player, so you won’t have to worry about ceiling measurements and installation. But that’s not all. Continue reading to see how it is already enhancing home media rooms in Lake Norman, NC.

What Is A Short Throw Projector?

A short-throw projector only needs a foot or two of space to project an ultra-large image above it. You won’t need to run long HDMI cables across the room or install brackets on the ceiling. To assemble, you’ll place the device on a low table (perhaps one that already houses DVDs) eighteen or twenty-four inches in front of the screen. From there, a crystal-clear image shines on your fabric screen. You won’t have to worry about walking in front of the projection and casting a shadow. But for superior picture quality, you’ll need a screen that rejects ambient light. We know just the brand to trust.

If you’re using a projector in a space that has windows and therefore lets in ambient light (like a media room or family room), you’ll need an ambient light rejecting (ALR) screen. Screen Innovations’ ALR screen is made of a material that rejects light from above, only accepting light from directly below, which would be emitted from your short throw projector. The screen has an ultra-wide viewing angle—a cone of 170 degrees—so you can see the picture clearly from any direction in your living room.

Because the device rejects ambient light, the resulting image bright and colorful for all movies, TV, and games. The screen’s gray color increases video contrast by 700% when compared to a standard white screen’s material. You’ll enjoy the massive size of a projector without requiring a home theater to fully enjoy it.

Where can you find a short throw projector and ALR screen by Screen Innovations? If you’re in Lake Norman, NC, The Integrated Home is your destination. Plus, we can install all your theater AV equipment exactly how you want it, including the devices we mentioned today, speakers, and much more. Contact us here to get started on your home media room.

We look forward to speaking with you!

TV vs. Projector: Which Is Best for Your Home Theater System?

4 Media Room Design Trends That Should Be on Your Radar

3 Things to Know Before Adding a Home Theater System

No comments made yet. Be the first to submit a comment

Existing Client Support
(704) 412-9301
This email address is being protected from spambots. You need JavaScript enabled to view it.

The Integrated Home is rated 5 out of 5 based on 30 reviews from around the Web.

Powered By One Firefly | Sitemap